Jaganoo is a historical town located at a distance of  about 12 kilometres near the bank of the Tawi river to the east of Udhampur district headquarters. The geographical location of this ancient town is 32.34 latitude and 39.30 longitude.

In the days of yore, it used to be an important trade centre and traders from Jammu, Samba and Amritsar would come here for stay and use it as a transit place to buy and sell their goods.They would send their goods  to Ramnagar, Doda, Kishtwar and even to the Valley of Kashmir.

Before 1920, it was the largest town in Tehsil Udhampur and it had more than a hundred shops.But after 1920 when Jammu & Kashmir highway came into existence during the reign of Partap Singh, this ancient town lost its importance and a large no. of traders shifted their business to Udhampur. 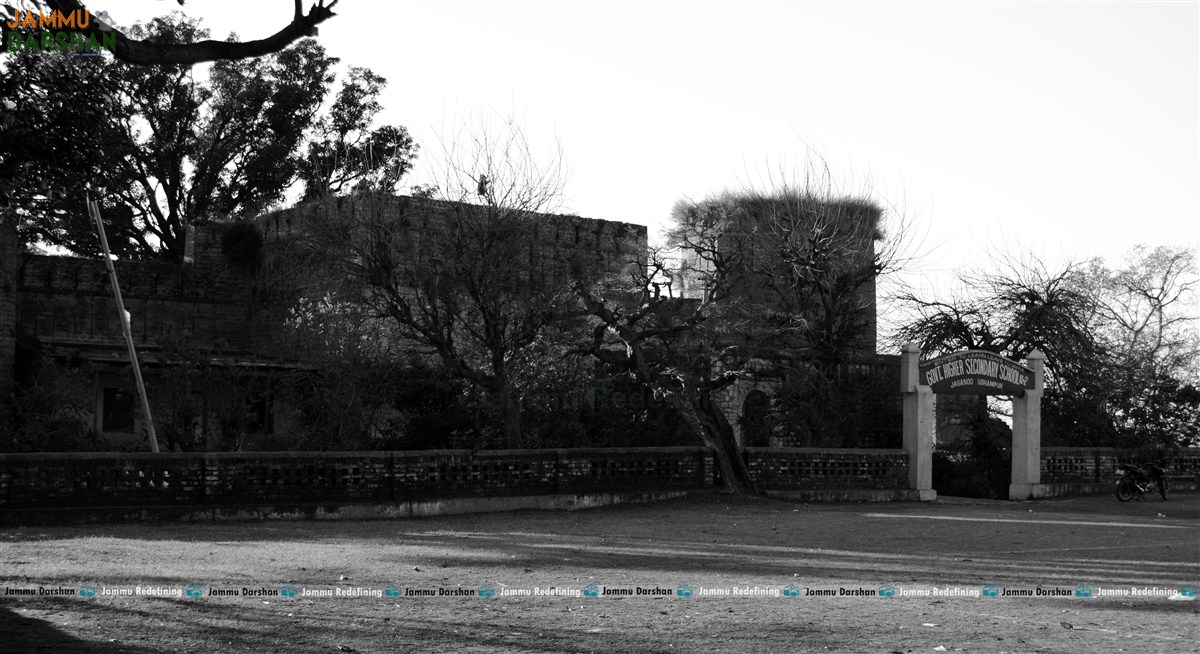 The majestic Fort built in the Mughal design, on a small hillock and serving as the impregnable boundary wall of the local Government Higher Secondary School, and  declared as a protected monument by the Archaeological Survey of India, bears testimony to the historical importance of this ancient town. 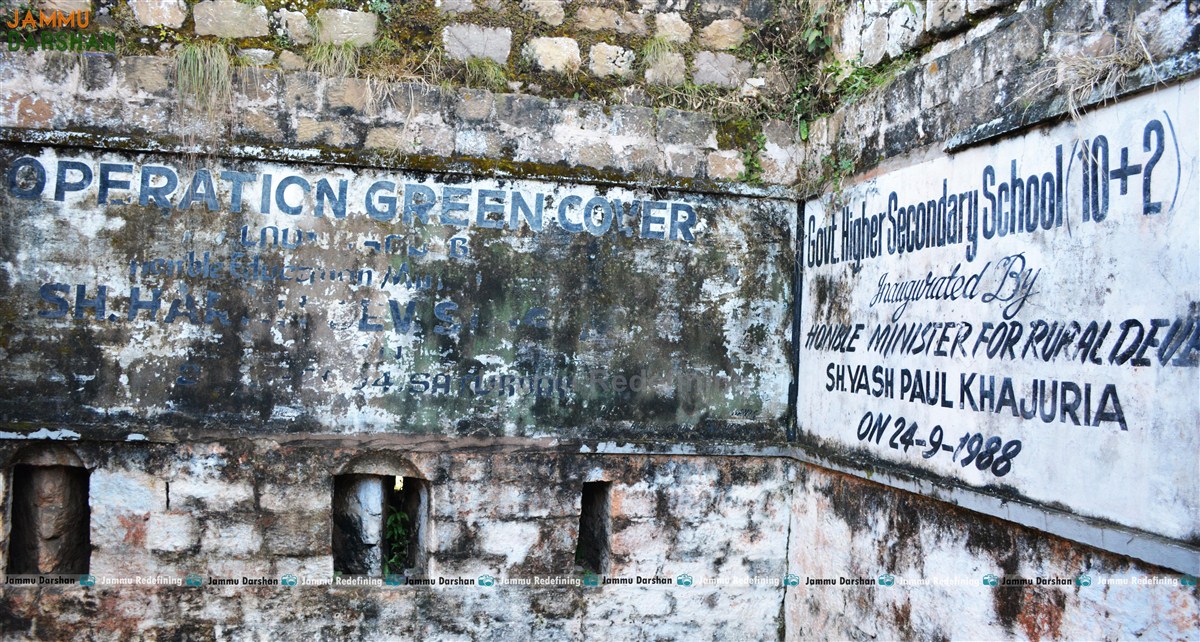 According to the renowned writer and historian, Prof. Shiv Nirmohi, this fort is believed to have been constructed by Raja Suchet Singh in 1828.

According to  Bansi Lal Gupta (retd.Principal) some funds were also sanctioned for the upkeep and protection of this historical fort but nothing has been spent so far. Meanwhile one of the walls of the fort has crumbled down due the incessant rains  a few months ago and walls have been covered with weeds and grass. If repair and restoration work is not taken in near future, the other walls of this majestic fort may meet the same fate and it may become difficult to restore the original shape and glory of this historical fort. 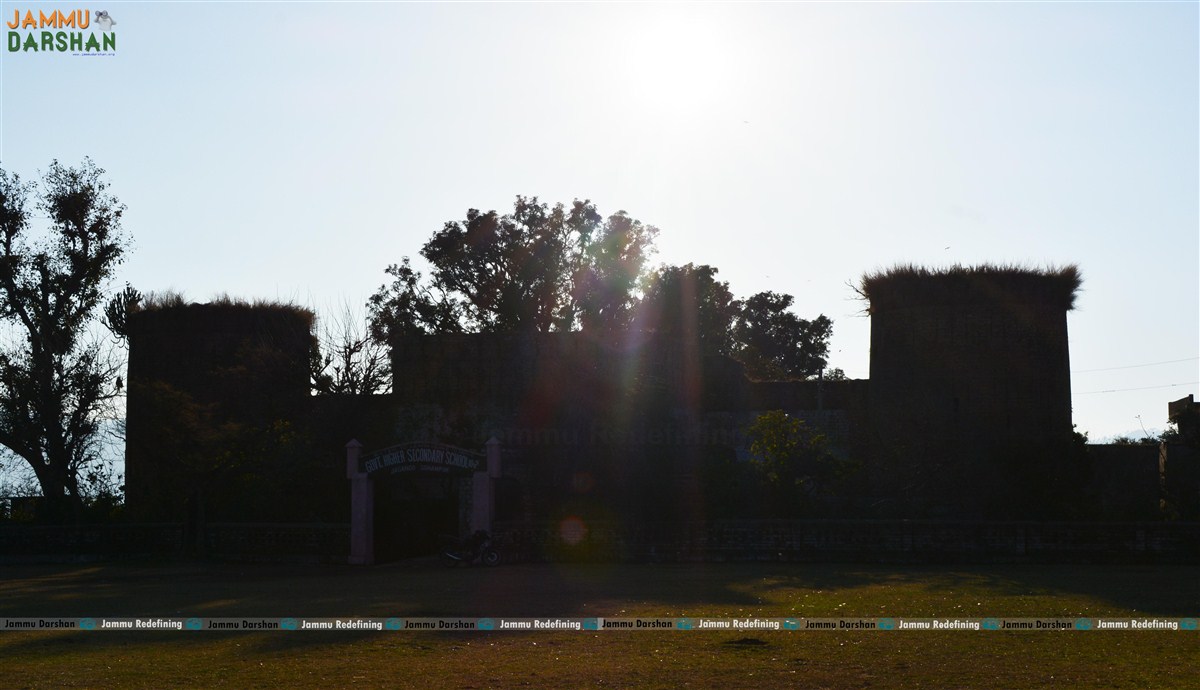 Besides, it boasts of an ancient pond called ‘Duryodhana da Talaab’, which measures about 100 ×100 metres which has bathing ghats on all the four corners. Local residents say it was the only place for washing clothes and people would  throng this pond in the yore years with the result that there would always be hustle and bustle. 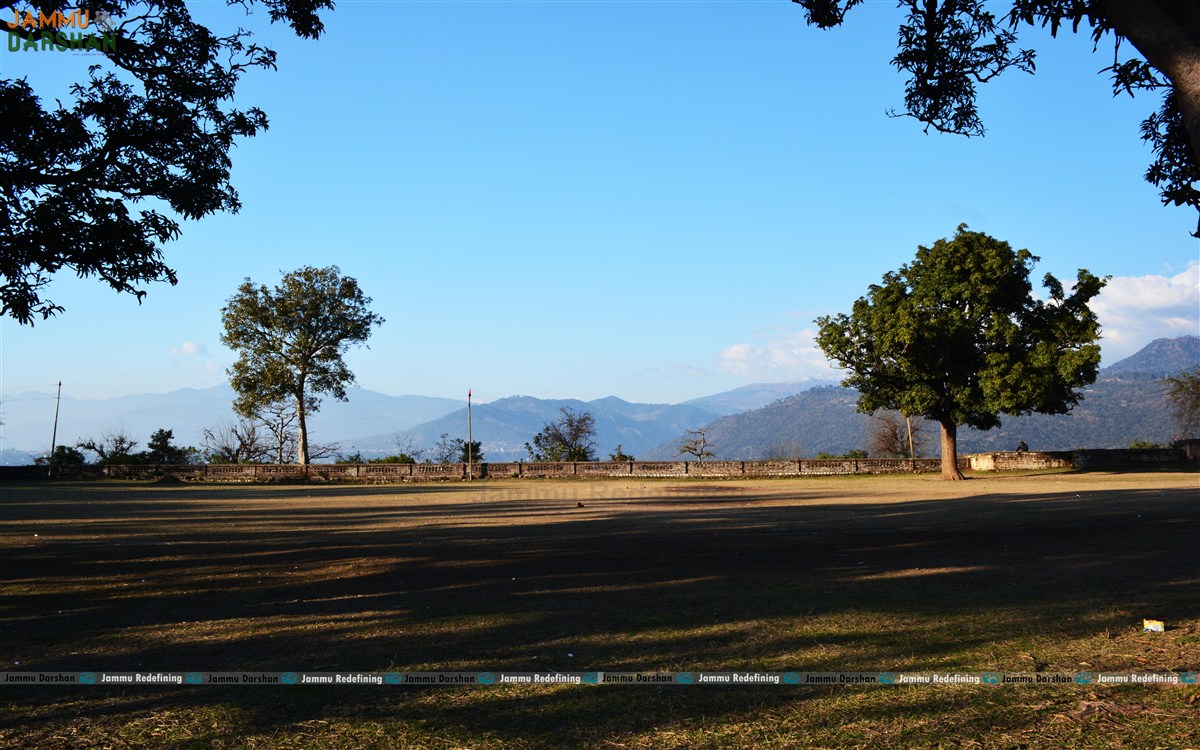 Even now the water of this pond is used for the purpose of construction  of their houses.But now the pond is lying in a neglected state.

Growing by the pond is a tall and shady Jamun tree under which the local people sit, relax and share their griefs and sorrows and indulge themselves in gossip and hot political discussions, especially during summer to protect themselves from the scorching heat.

Many ancient bowlis are also there in the vicinity of the town. These bowlis still serve as an important source of drinking water for many people as they believe that the water of these bowlis is digestive. 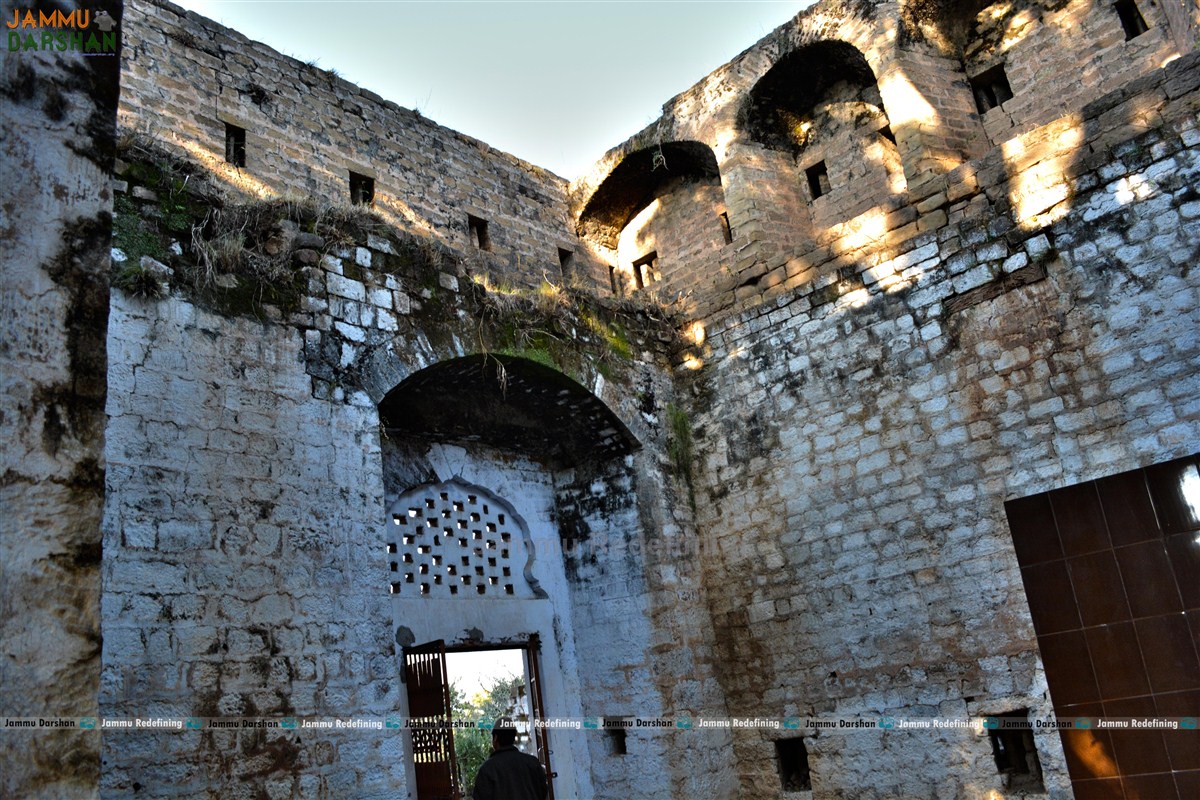 There is an ancient temple dedicated to Lord Shiva, a Narsingh Temple and a Kali Mata temple in Jaganoo. These temples are widely reverred and attract a large number of devotees from the adjoining villages and Udhampur city.

A grand Bhandara is organised at the Kaali Mata Mandir on the auspicious occassion of Makar Sankriti every year, in which a huge number of people from neighbouring villages and also from Jammu and Udhampur take part.

Thus this ancient town has rich historical and cultural importance and efforts need to be made to conserve and preserve its rich heritage and bring it on the map of tourism to improve economy of this area.

People living in and around the township of Jaganoo are virtually living in a hell because of the ever growing  menace of monkeys. The population and ferocity of monkeys has increased so much over the past few years that they have made the life of people miserable and hellish and a good number of people tired of this menace have migrated to other places including Udhampur town.

The monkeys, which have grown both in number and ferocity over the last few years ,move in big groups and attack whosoever comes their way. 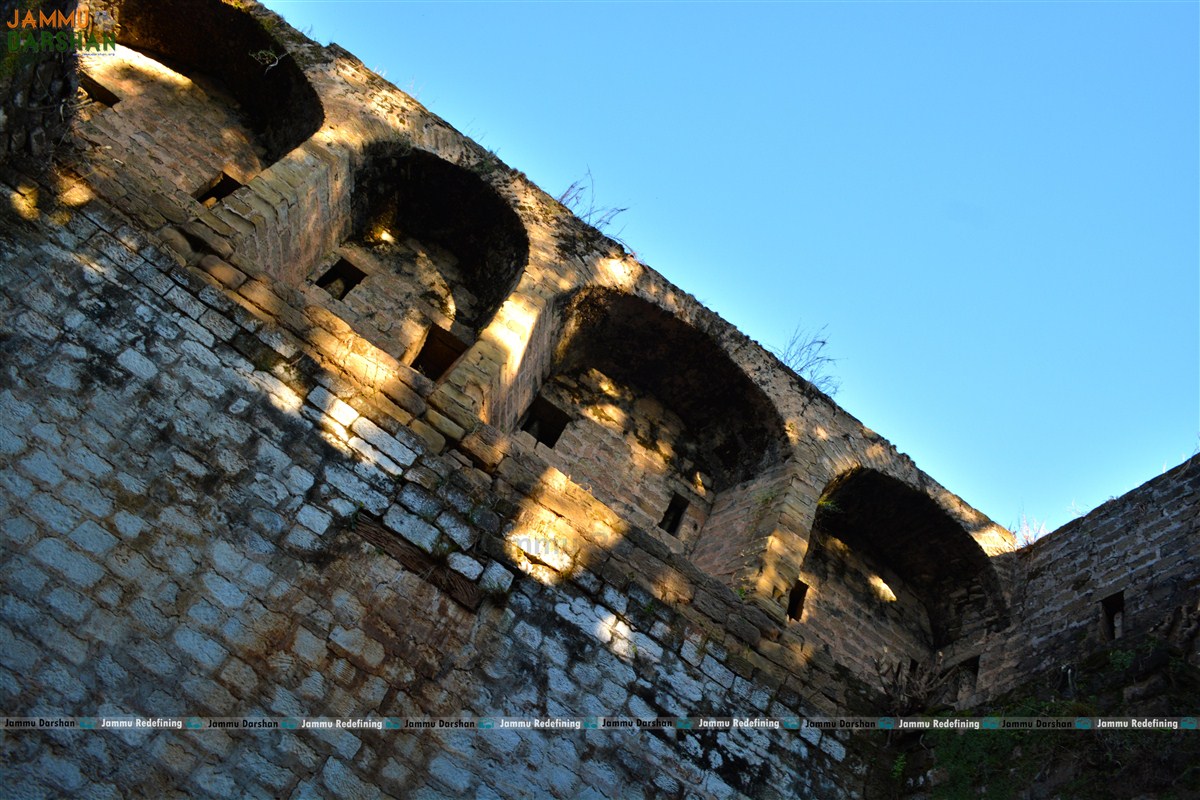 Worst affected are the young school children and senior citizens who find it difficult to defend themselves from the fearless and ferocious monkeys and  are often bitten or injured by the  latter. The shopkeepers and housewives too suffer a lot as the monkeys cause them huge loss by taking costly goods and eating or damaging them.

Even they attacked our team when we entered into premises, just wondering how those school children study there.

Local MLA and now Minister of State Pawan Gupta has promised during his pre-election speeches last year to develop this place as a tourist spot. Lets hope for the best and bring back its pristine glory!!

* With Inputs from Daily Excelsior