Krimchi is the site of one of the oldest temple complexes of Jammu & Kashmir. It can be reached by taking a short detour of about 20 kms along a side road that branches off from the National Highway 1-A, about 12 kms north from Udhampur city.

Believed to have been constructed in the 8th – 9th century AD, this group of temples, also locally known as the Pandava Temples. Consists of 4 Large and 3 small temples dedicated to Lord Shiv. The architecture of the temples shows distinct Greek (Hellenic) influences. 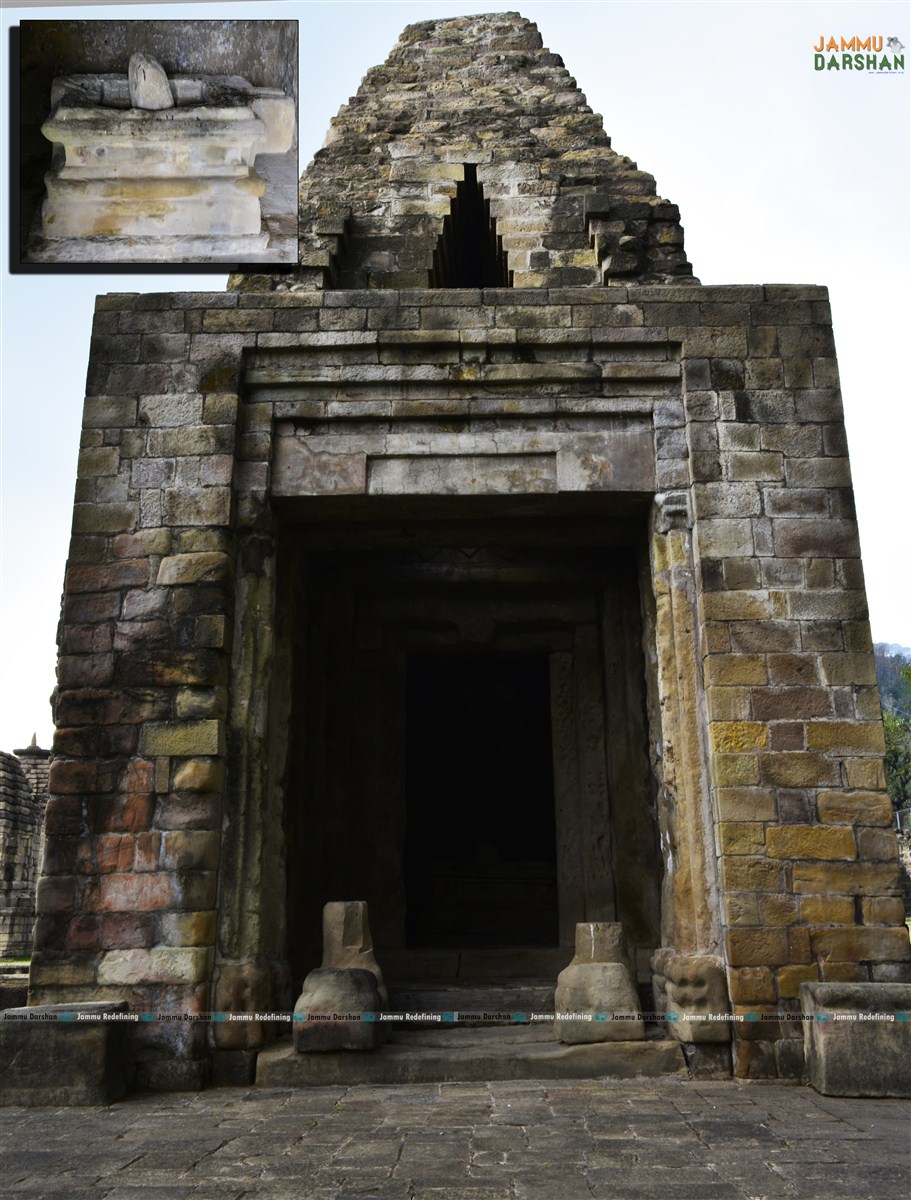 As per the legends, Raja Kichak of Mahabharat was said to be the creator of town Krimchi and the Kingdom. It is also said that Pandavas while in exile remained there for a long period. 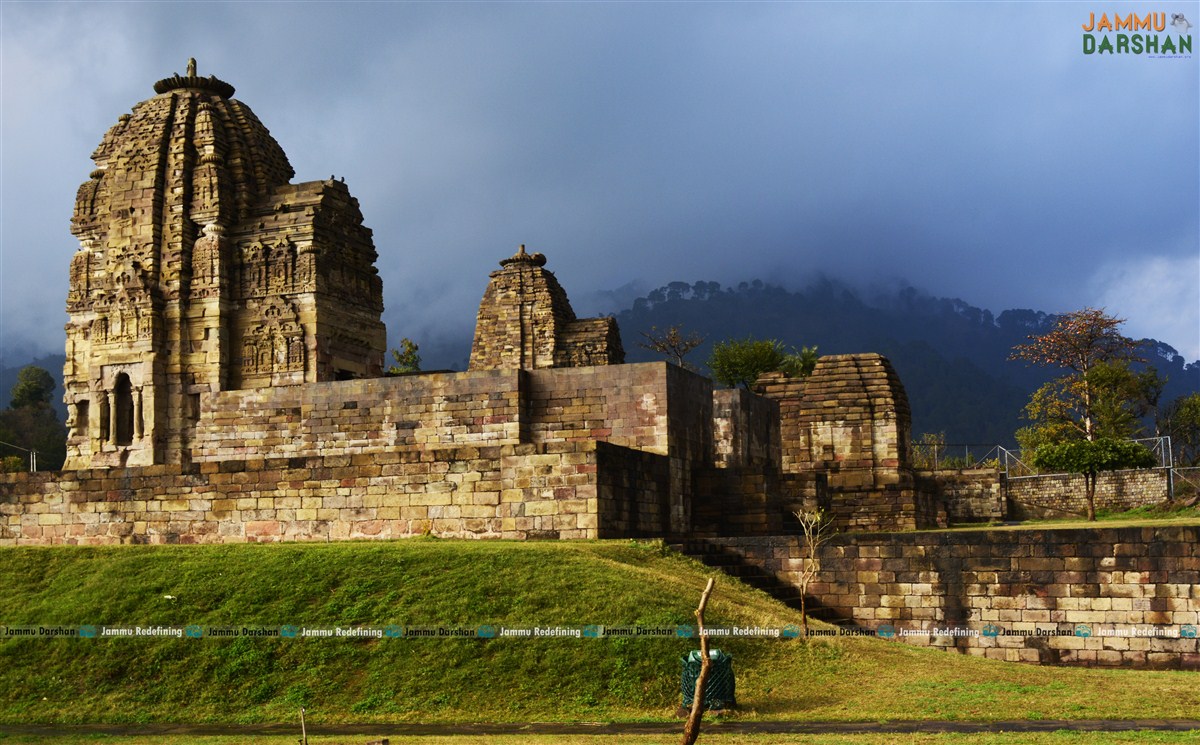 Tourist attractions at Krimchi include the ruins of Three Ancient Temples. These three temples are perhaps the oldest temples in the state of Jammu and Kashmir. The architecture on the walls of these temples is abstract. There are sculptures of deities like Ganesh, Shiva and Parvati. The main Temple is around 50 feet high. At a little distance from Krimchi lies Panchari, which is a picturesque Hill Resort. Tours to Krimchi give tourists an opportunity to appreciate the ancient culture and heritage of Jammu Region.

According to ASI version these temples were constructed during 8th or 9th century AD as displayed on a board near entrance of the complex. The Complete group of temples were not constructed at a time but they have come up by and by. For example temple No. 6 and 7 were damaged centuries back as can be ascertained from the locals. The information passed on by the forefathers to next generations reveal that long back only plinths of these two temples existed.

Krimchi was a halt station on Jammu-Kashmir trade route. Kichak king a contemporary of Pandavas is said to have laid the foundation of Krimchi. Kichak was killed by Pandavas and Krimchi remained kingless for many centuries. According to revenue records Bhupal Singh of village Landhar came to Krimchi and constructed his palace within the walls of fort on Garh top. He had no off springs and Krimchi became kingless again. According to Diwan Narsingh Dass Nargis king Puran Karan sent his son Dayakaran to Kashmir on the demand of people. His successors ruled Kashmir for fifty five generations.

King Som Dutt of same clan came to Krimchi and established his Principality namely Bhuti. The area up to village Landhar was included with Bhuti with its capital at Krimchi. After ruling for next twelve generations by his successors Bhatyal Rajputs, there was a large expansion in the family and many of them settled down at other places. King Bhadur Singh of same lineage ruled Bhuti during the period Ranjit Dev of Jammu. Himmat Singh was the last ruler of Bhuti and principality was merged with Jammu by Maharaja Gulab Singh in 1834 AD. 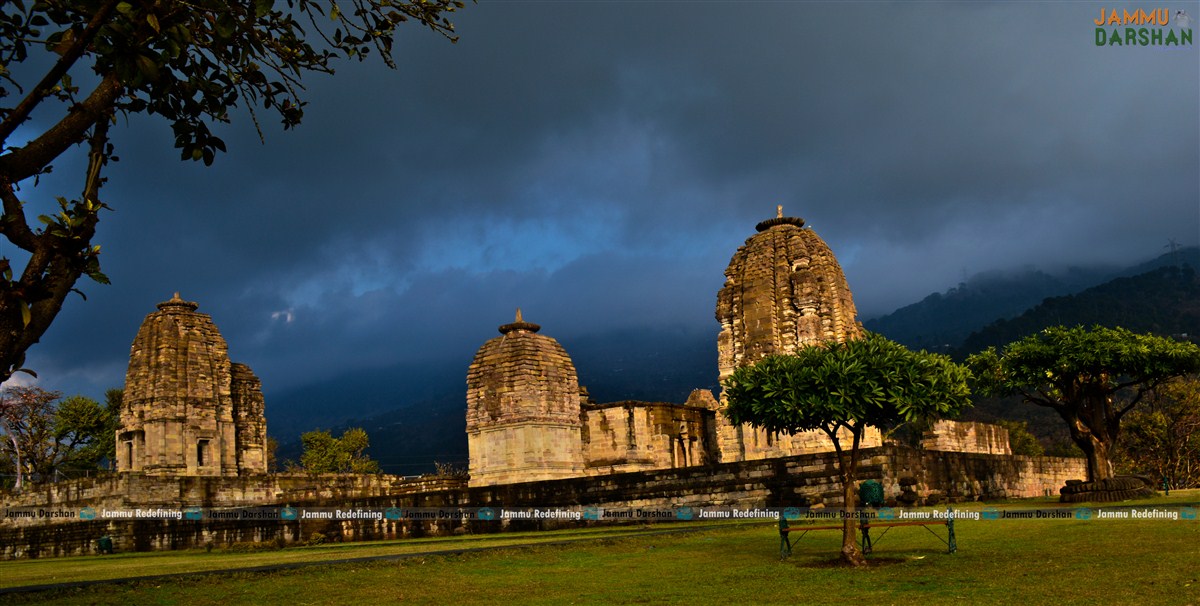 Temples at Krimchi are marked as No. 1 to 7 by ASI for easy reference. Temples No. 1,2,3,6 and 7 are built on a common raised platform. Temple No. 4 is built on much higher platform. Its height from entrance gate side is 12 ft. The steps are provided from three sides to reach platform vis a vis temple. A chance discovery by ASI revealed that temple No. 4 stands on brick structure datable to post Gupta period constructed over 70×50 ft plinth area. The temple No. 1 is most developed and ornamented. It depicts large size mouldings, niches for dash-dikpals and saptmatrikas in addition to prasava devtas. A beautiful standing image of four armed vaikuntha Vishnu is enshrined in garbagriha. 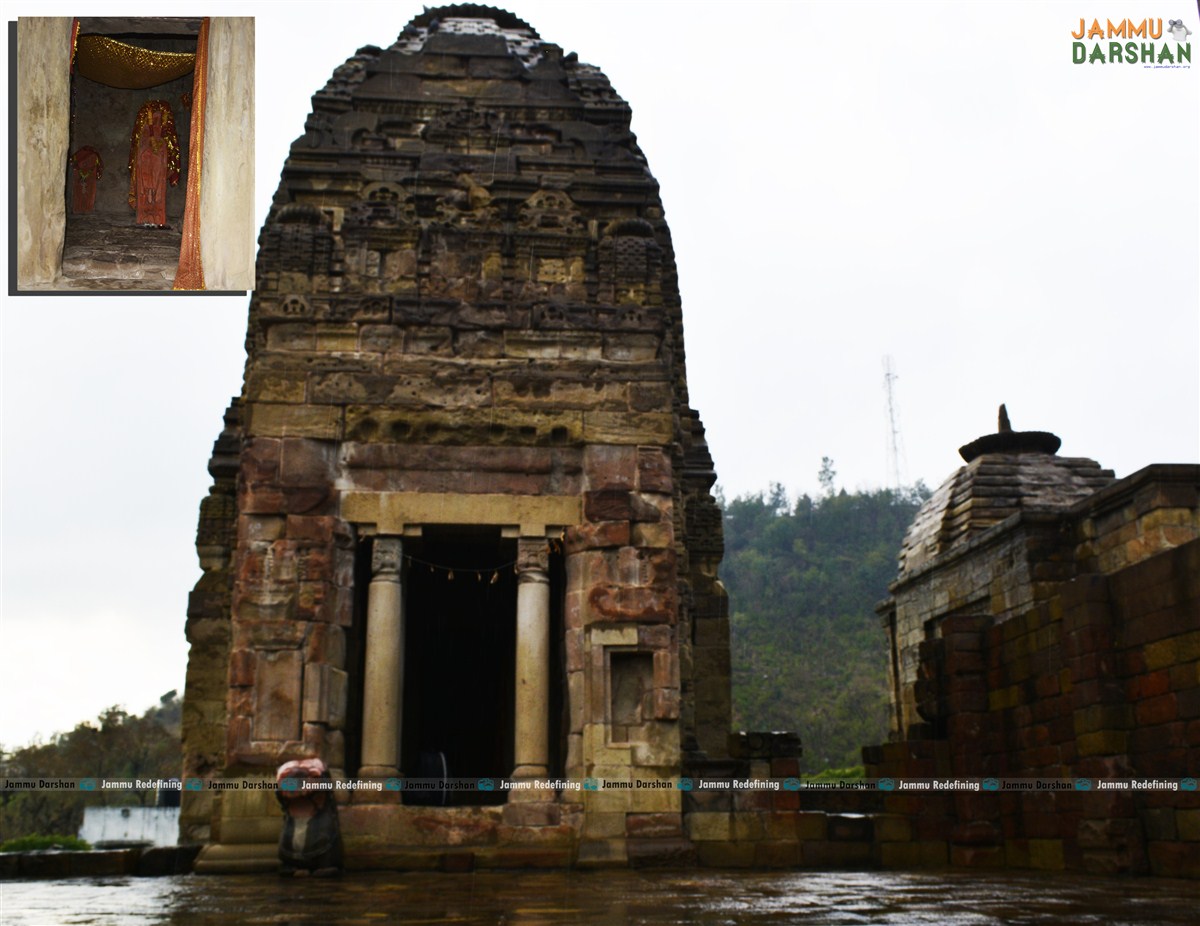 Parveshdwar where a nicely decorated door is provided for enterance. Like wise there were two famous styles of construction found in India. Dravidian style in South and Nagra style in North, the mixture of both ‘Vesar style’ was found in central India. It is not necessary that in all the constructions in North India Nagra style was used.

The examples of Ranga temple of Vrindaban and Badrinath temple of Uttrakhand could be well quoted that they are built in Dravidian style. The style used by Mughals is known as Mughal style. The temples of Krimchi are constructed in ‘Old Nagra Style’. They resemble Baij Nath, Lingraj, Parshurameshwar temple of Bhubneshwar, Barmour Shiva temples and Chamba temple. The architecture of the temples belong to same school as that of Sukrala Mata, Billawar, Bhimber, Rajouri, Panjnore and Saidabad. The temples contain Indo-Aryan style with reflection of Kashmiri and local Influence. The temples show local influence to a large degree of that time. 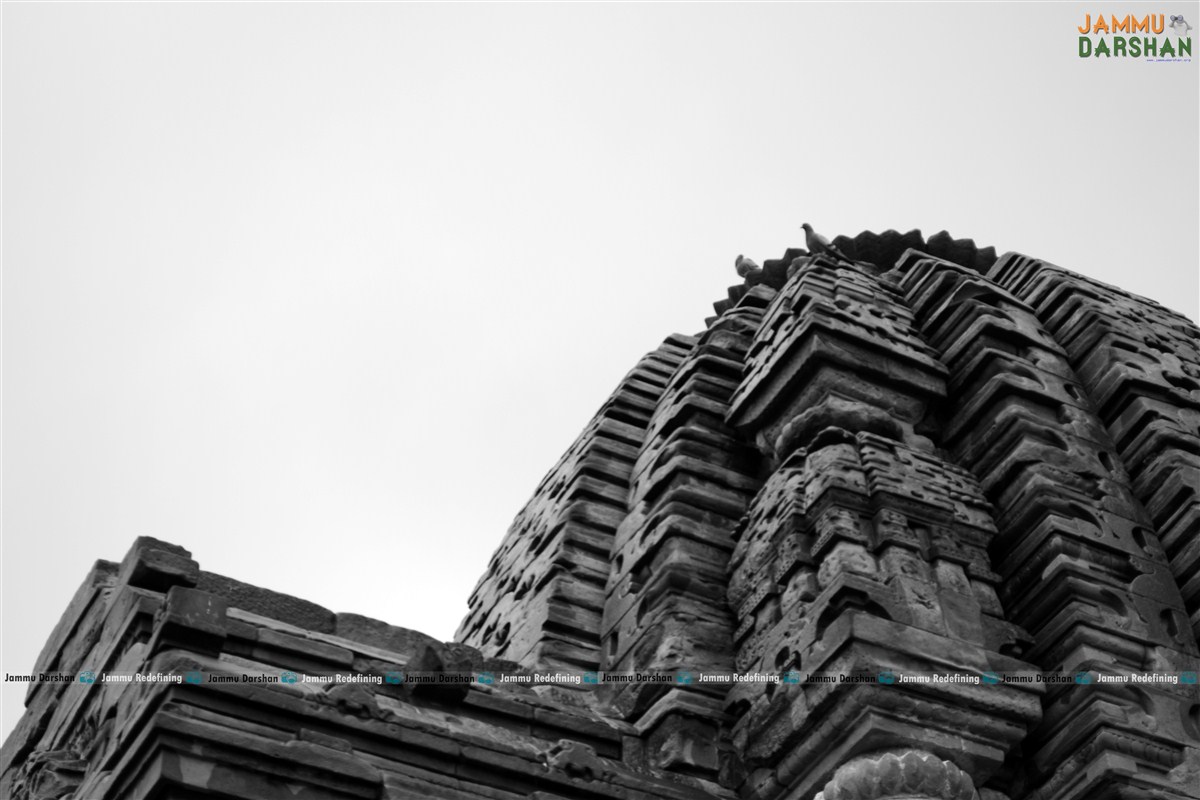 Temple No. 3 seems to be the oldest. The temple No. 2 is spread on a large area and little higher in elevation in comparaison to temple No. 3. The entry to this mandapa is through an arch. The pillars of temple no 5 show remnants of sculptures most probably as river goddess. All the temples except one are east faced. Temple no 5 is built over as platform on lower level and its east side steps lead to more lower level. According to locals, at the time of digging to find the base of steps, a door structure was seen in the depth on the boundary of temple complex. 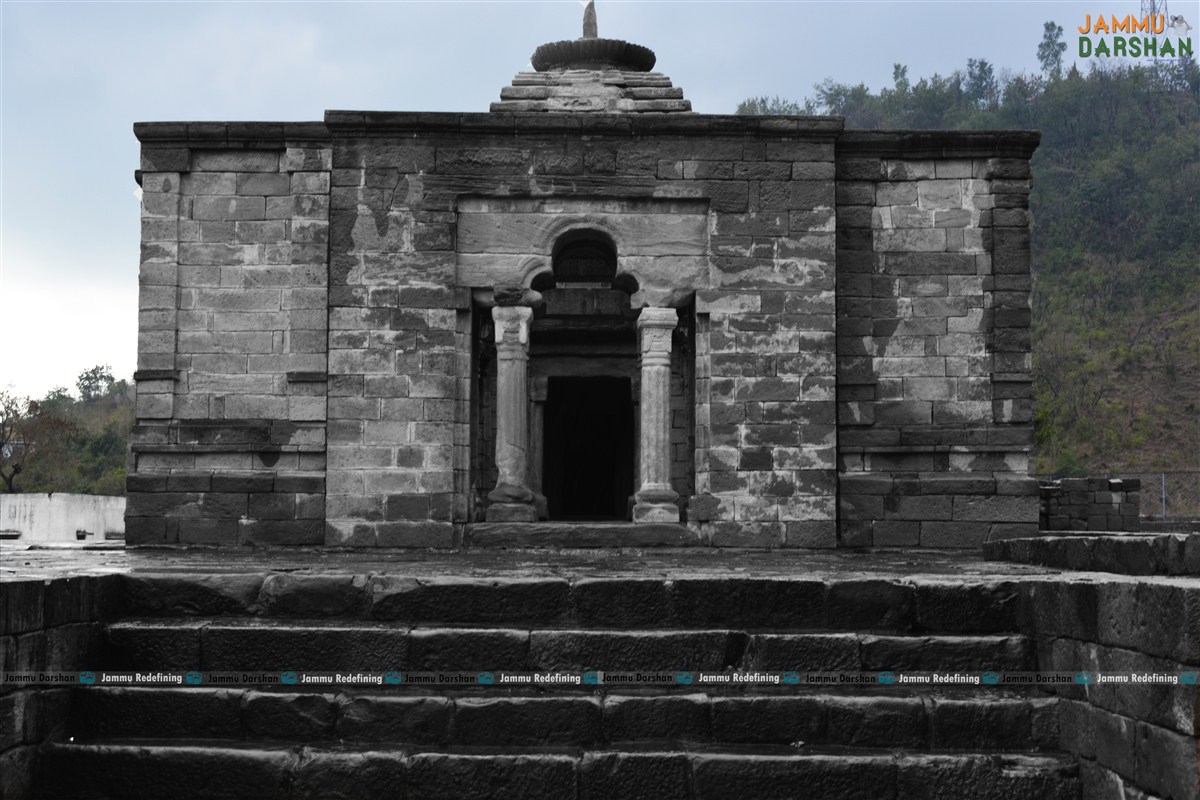 Since digging was made only for leveling the ground and beautifying the landscape, no further excavations were made with a view of further research. The locals have also found carved stone idols from time to time while ploughing the land in near by area. A number of terracotta figurines, copper coins, iron arrow heads, bead of some precious stones, pestles, and earthen pots recovered during the trial excavations carried out by ASI are exhibited in a show room for visitors. 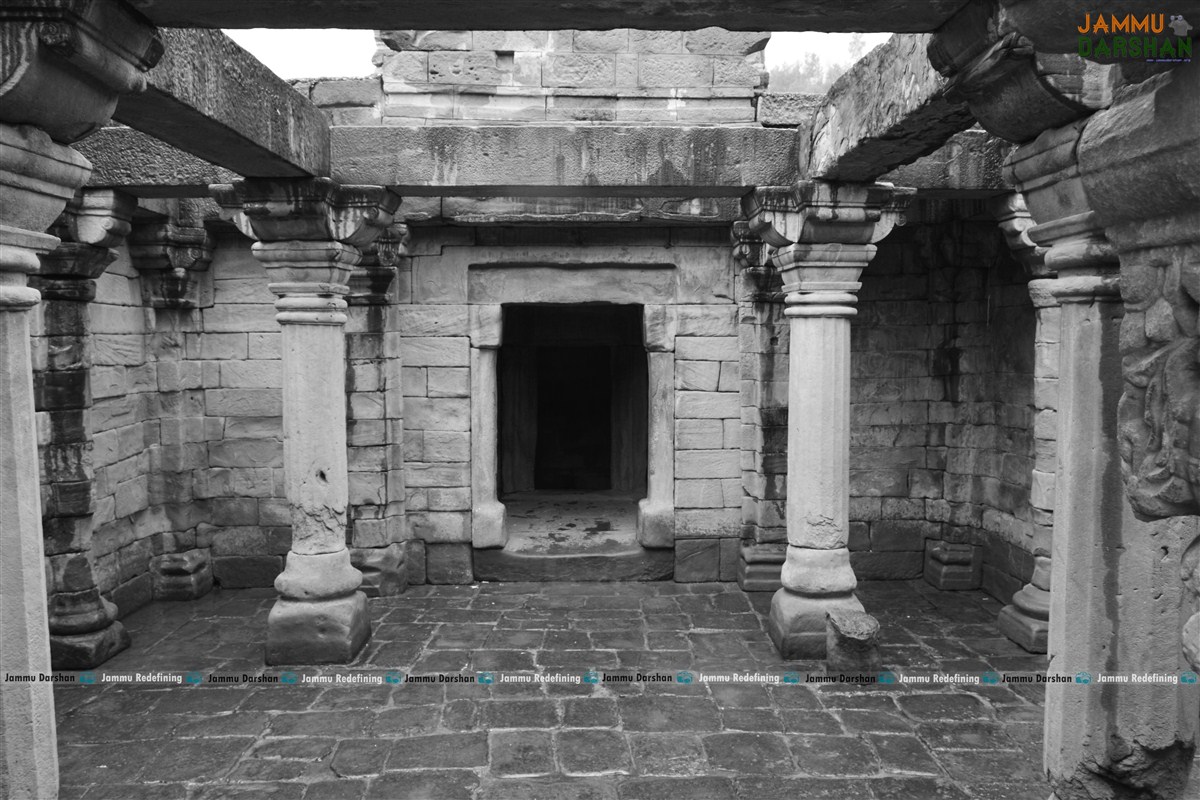 The local people call this group of temples as Pandava temples and hold the belief that the temples were originally built by Pandavas during their exile period. Some scholars date these temples to second century AD built by Kushan ruler on way to Kashmir. It is believed that Kushan ruler was moved to pity at the sight of sufferings and misery caused by long wars. He became a Buddhist. More realistically these temples appear to have been built at some later date. Dr Mani assigns the temples to 8th or 9th century AD and credits them to be built by Dev dynasty of Jammu.

The idea of locals cannot be out rightly rejected that temples pertain to Mahabharat times. Initially, the temples might have been constructed by Pandavas and ruined by the ravages of time and got constructed again in 8th or 9th century AD. In case more excavations are made or alternatively survey by specialists something new can come up about ancient temples which has been lost in antiquity.

The monuments are of historical importance. Grassy parks and flower beds attract the visitors and are well maintained by ASI. The immediate requirement is the construction of link road about one kilometer to provide the connectivity. This would not only promote tourism but also add to economy of the region.