A popular legend associated with this shrine is as: Once, when Goddess Parvati was in deep prayer, a demon called Sudheet came to pay his respectful obeisance. But his demonic look frightened the Goddess and She made a loud shriek. Her cry revered acted across the mountains surrounding the valley. Lord Shiva was disturbed by the sound. When He opened His eyes, He saw the demon, at whom he hurled His invincible Trident (Holy Trishul). 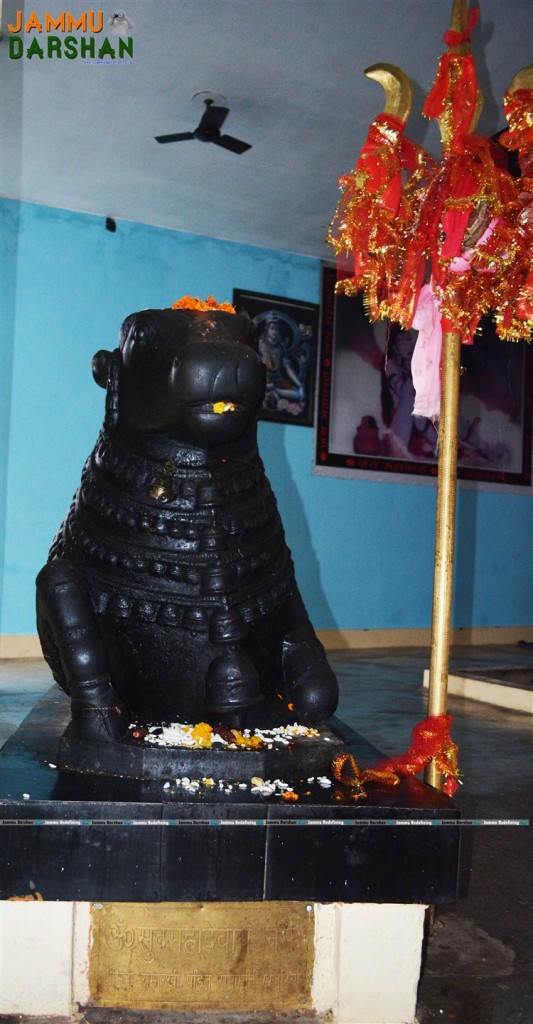 As the trident pierced through Sudheet, he began to chant Lord Shiva’s name. Lord Shiva realized the mistake, so He offered to bring Sudheet back to life. But Sudheet refused to come back to life telling Lord Shiva that only by dying at His hands would he be able to obtain moksha (Salvation). Moved by the demon’s words, Lord Shiva ordered that, henceforth, Sudheet’s name would be taken before His own at the place where he was killed. That is how the place where Goddess Parvati used to worship a shivling came to be known as Sudhmahadev.

The shivling and the remains of the trishul can still be seen at the temple. The temple has a Dhooni (Eternal Flame) to commemorate the spiritual attainments of Baba Roop Nath who is said to have attained Samadhi here about several thousands years ago.

In the temple premises, there is a Trident (Trishul) that in the local dialect is called ‘Gaja’. The sacred Trident has inscriptions in the ancient manuscript that form a major topic of research for the archeological department. According to Roopnath, the first religious head of the temple of Sudhmahadev, “Amardhuni’, ‘Gorakh Nath temple’, the huge idol of ‘Bhairava’ and the ‘Garbha Jun below the Nandi gan’ are considered to be great places of worship for the pilgrims.

It is said that the ‘Dhooni’ has been kept burning constantly ever since Baba Roop Nath is said to be residing in the temple. Thousands of pilgrims visits the temple especially during the three day fair held on the occasion of Jeshta Purnima (i.e. Full Moon of June).

The holy environs of Sudh Mahadev are known to have been the seat of meditation for Goddess Parvati to attain Lord Shiva (Gaurikund). Gaurikund is around 10 km away from Sudh Mahadev. The Shiv temple at Sudh Mahadev enshrines the three pieces of the “Holy Trishul” used by Lord Shiva to protect Goddess Parvati from the demon Sudheet and is very popular amongst pilgrims.

Sudhmahadev temple is located on the banks of the holy river Devak (elder sister of Ganga), the unique carvings of Lord Shiva and Parvati add to the fervour, mystique and devotion at the Sudhmahadev temple.

The shrine gains significance especially on the full moon night of Sawan (July – August), when devotees come here to worship the “Trishul” (trident) and a mace. There is also a “Devak” stream originating at Sudh Mahadev and vanishes amid the rocks after a few km.